SINAG Finishes World Solar Challenge with a Day to Spare 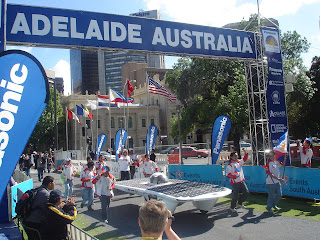 Adelaide, Australia, October 27, 2007 –The SINAG solar car arrived at the finish line of the World Solar Challenge (WSC) with over a day to spare –a remarkable achievement for the Philippines’ first solar car to compete in this gruelling 3,000km race against 40 other entries from around the world.

SINAG arrived in Adelaide at around 4pm, well before the 5pm cut-off for the day. “The Philippine flag has reached Adelaide!” proclaimed SINAG Technical Head Engr. Rene Fernandez as the car crossed the finish line, greeted by a small crowd of Filipino well-wishers carrying small flags of their own.

The all-Filipino Team SINAG was warmly welcomed by the Lord Mayor of Adelaide Michael Harbison and by Hans Tholstrup himself, the founder of the WSC and the first person to cross Australia in a solar car, The Quiet Achiever. Team SINAG also got to meet the members of the Nuon Solar Team from the Delft University of Technology, the multiple successive winners of the WSC.

The official results and rankings of all the WSC competitors will be tabulated and announced at the Awarding Ceremonies to be held at 4pm on Sunday, October 28, at Adelaide’s Victoria Square.

Since arriving in Australia just over two weeks ago, the team achieved its first triumph when SINAG passed the strict Scrutineering and Qualifying events to compete in the Challenge Class of the race. The car’s competitors included similarly high-tech entries from universities and organizations around the world.

Exceptional performance from start to finish
SINAG performed exceptionally well from the moment it left the starting line in Darwin on Sunday, October 21. Needing only minor adjustments to its brake system, the Philippine solar car quickly jumped to 11th place overall. The team maintained this position and made excellent time, passing the halfway mark at Alice Springs on Wednesday, October 24, and breaching the 2,000km mark at Cadney Homestead the following day. By the evening of Friday, October 26, the team had already made its way to Glendambo, the second to the last stop –less than 500km from the finish line. Team SINAG made it in high spirits to Adelaide on Saturday, ahead of more than a dozen rivals.

Hope for the future
“This has been a dream come true for all of us! All the months of hard work and preparation really paid off. We managed to do more and go farther than any of us thought possible,” enthused Eric Tan, SINAG’s Lead Driver.

“SINAG weathered the course far beyond any of our expectations. It’s positive proof of not only the car’s solid design and construction, but also our own capability to successfully deploy solar power technology in the Philippines,” says Engr. Fernandez.

Filipino all the way
Homegrown Filipino talent is behind every aspect of the SINAG solar car, from its sleek monocoque shell to its dynamically adaptive electrical system. Even the car’s unique back-contact monocrystalline solar cells, which are among the most efficient commercial solar cells in the world, are proudly Philippine-made in Laguna.

As of 10:30 AM (Australian Time or 9:30 AM Manila), Sinag has passed the last control stop on its way to Adelaide. Team Sinag is less than 300 kms away from Adelaide. As of last count this morning from the WSC blog, SINAG is at the 20th position overall and is somewhere between 10th and 11th place in the Challenger class.

We expect SINAG to cross the finish line today by 4 PM Adelaide Time (5 Pm manila time). Go SINAG. Note that the positions given are unofficial and does not include time penalties incurred by all the teams during the race.

Dennis
Posted by SINAG@WSC at 7:36 PM No comments: 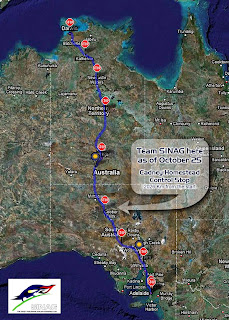 SINAG, the Philippines' first fully-functional solar car has breached the 2,000 km distance from Darwin to Cadney Homestead today, passing Alice Springs, the halfway point of the 3,000 km. stretch of the World Solar Challenge. Since the start of the Challenge, SINAG has jumped to 11th place and continues to maintain this lead in the Challenge Class of the race, which has about 40 participants.


According to SINAG’s technical personnel, the solar car has been performing better than expected since the start of the race on October 21, Sunday. SINAG was easily able to surpass the 1,000 km mark without needing to rely on auxiliary power –an option which, although allowed by contest rules, would result in a reduction of the team’s overall score. The team has also managed to correct a minor problem with SINAG’s brake system which was causing the car’s tires to wear out faster than expected, prompting frequent tire changes. Since then, Team SINAG has experienced no further major technical difficulties and has more than made up for lost time.


"We are making good time so we can make it to Adelaide by Saturday or early Sunday morning," said lead driver Eric Tan. "We just need to reach the next designated control stops before the deadline in order for us to be able to continue to race. Missing two control stops will disqualify us." Tomorrow, SINAG will make its ways to the last two control centers in Glen Dambo and Port Augusta, before the finish line in Adelaide.

Despite its good showing, the team remains cautiously optimistic of its chances of finishing the prestigious race. For certain, the De La Salle University-Manila students already feel triumphant the solar car they have built from scratch is performing better than the other entrants from other countries. "Whether or not we finish this race, we feel we've already accomplished our goal of building a working solar car and letting people at home know that solar power is a viable and reliable source of energy," said Robert Obiles, student team leader. "Plus, this has been one great big adventure." he added.

It's not everyday that Filipino mechanical engineering students get to race and camp out in the outbacks of Australia. the Filipino team was especially elated upon passing Ayers' Rock, one of the most popular natural landmarks in the Australian continent.


The SINAG solar car was designed and built by a group of dedicated faculty and students from the Mechanical Engineering and the Electronics and Communications Engineering Departments of De La Salle University –Manila, with the support of Ford Group Philippines, Motolite, Philippine Airlines, San Miguel Corporation, Shell, SunPower, U-Freight, and Ventus. The project is also supported by Aurora, Cabrera Lavadia and Associates, JWT, Creasia, Merritt Partners, Tuason Racing School, Gochermann Solar Technology, and Stratworks.
Posted by SINAG@WSC at 1:27 AM 2 comments: 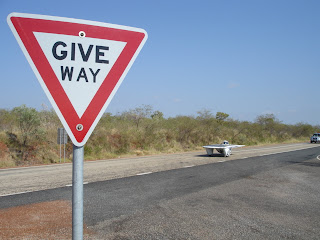 Photo taken by Jong Jimenez from Sunpower in Australia

According to WSC Day 4 Provisional results, Sinag climbed to 21st placed from 27th place yesterday among 37 racers. It has maintained its 11th place within the challenge class.

Sinag has travelled approximately 500 kms today. The most travelled by our team in a day. From my estimate, Sinag seems to be doing better and is poised to break into the top 10 in the challenge class(barring any technical problems).

Looks like the team has decided to skip staying longer in Alice Springs (as initially planned) and pushed themselves to the finish line in Adelaide. The team has been on the road since Sunday and has camped outdoors since then.

October 23, 2007 –SINAG, the Philippines’ first fully-functional solar car and the country’s first entry to the prestigious World Solar Challenge, is just 400km away from the halfway point on its historic 3,000km journey across Australia. Since the start of the Challenge, SINAG has jumped to 11th place and continues to maintain this lead as it makes its way to Alice Springs, the course’s halfway point.

According to SINAG’s technical personnel, the solar car has been performing better than expected since the start of the race on October 21, Sunday. SINAG was easily able to surpass the 1,000km mark without needing to rely on auxiliary power –an option which, although allowed by contest rules, would result in a reduction of the team’s overall score.

The team has also managed to correct a minor problem with SINAG’s brake system which was causing the car’s tires to wear out faster than expected, prompting frequent tire changes. Since then, Team SINAG has experienced no further major technical difficulties and has more than made up for lost time.

Team SINAG will be stopping over for the night between Tennant Creek and Wauchope, but is anticipated to reach Alice Springs well before the 5pm deadline tomorrow, Oct. 24, Wednesday.

Sinag has passed the second control stop at Dunmarra and has travelled at least 633 kilometers using the power of the sun.

10 cars have already been trailered to the control stop. Sinag is not one of them. As of today, Sinag is at the 29th place out of 37 cars (includes the trailered cars).

Sinag has to travel approximately another 600 kms tomorrow to Alice Springs.

Information presented here were collected from the WCS website.
http://worldsolarchallenge.blogspot.com/search/label/Results

According to the information from the WSC site, Team Sinag started the race at 35th (Challenger and Adventure Class combined)position on Oct.21, 2007 at 8:34 AM.

Sinag has passed the Katherine Control Stop (1st control stop)at 4:12 PM is at 21st position based on the control stop reports in Katherine and Dunmarra.

From WSC, "For many the 316 km between Darwin and the Katharine Control Stop are the hardest in the whole event. The leaders are usually through Katherine by lunchtime on day 1, while others don't make it!"

As of latest report from WSC blogs, at least 3 teams have already encountered major or minor accidents (one of which is among the lead teams).

For more information on media releases by WSC, go to http://wsc.org.au/Media.Centre/Releases/index.html

For the route maps and control stop go to http://wsc.org.au/Be.Part.of.It/Maps.Routes/map.html

Dennis Beng Hui - DLSU
Posted by SINAG@WSC at 3:13 AM No comments: 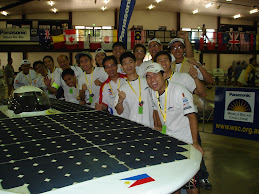